Another threat targets the DCU, but even if you may be feeling “Crisis’ fatigue by now, no true DC Comics fan will want to miss this spectacular star-studded issue. A team is forged from across time and space to take on a long-forgotten threat.

Just when you thought the new-born DCU could catch a break, it would seem it’s already been thrown into another universe shattering threat. This time from time-meddling Lord of Order, Dominus, who first appeared in Action Comics #747 (1998) and was last seen as a captive fo the Phantom Zone courtesy of Superman. That time, he just wanted to take over the world. This time, he’s got his eyes on a bigger prize.

But, what you’ll probably take away from the over-sized Generations Shattered #1 is the sense that you’ve just been on a magical mystery tour through some of DC Comics greatest eras, all hooked onto this over-familiar, over-used story line. But, over-used or not, I loved it.

As a mysterious white “goneness” eats away at various moments in time, space and more, you cannot help bt be reminded of the first universe altering crisis, 1985’s Crisis on Infinite Earths, narratively and visually. Especially as the first big chunk of this special first issue is drawn by one of my favourite DC Comics’ artists, Ivan Reis. Reis, as any DC Comics fan will know, does “epic” almost as well as George Perez himself, and while his artwork is very different (I’ve always considered him this generation’s Neal Adams, but better!), in its own way its equally as marvellous and eye-catching. Even when his distinctive artwork is almost buried by Scott Hanna’s inking, Reis’s art still shines through. But, with the lighter hand of Joe Prado on inking duties at the top of this issue, you’re dragged into the action from the very first page, as Kamandi is plucked for extinction by an aged Booster Gold. You cannot help but be impressed by the jaw-dropping art of his and Prado. But, this whole first issue is made up of some great art. And, Dan Jurgens. An artist intrinsically linked with DC Comics – and Superman – but one who’s limitations are only that more obvious when placed shoulder to shoulder in this book with the likes of Doug Braithwaite, Yanick Paquette and the welcome return of Rags Morales. Although, as a writer, I can’t fault his scripting, alongside Andy Schmidt and Robert Venditti. The three of them have really turned in a sensational storyline. 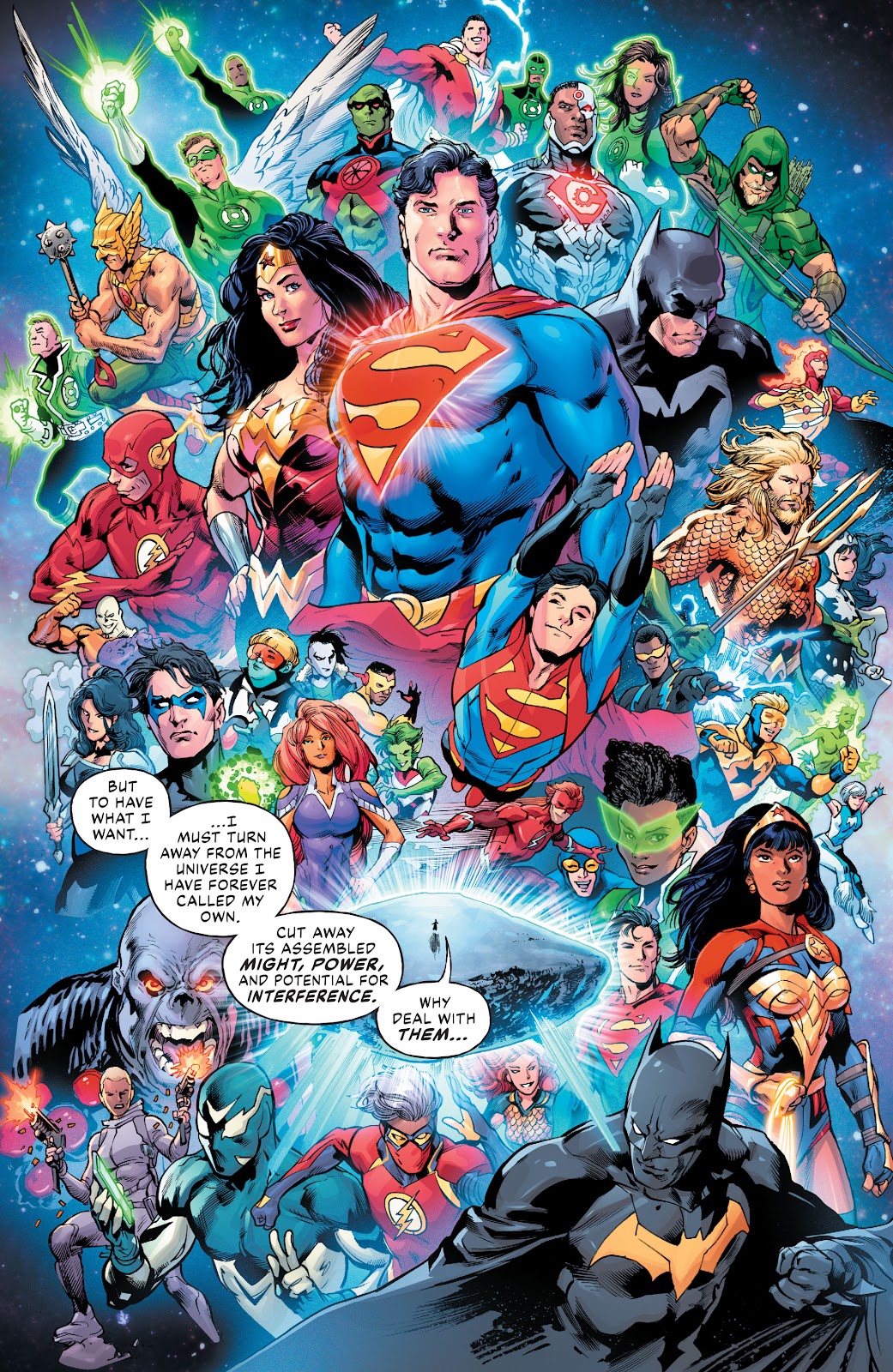 As for some of the artist included, just like Jurgens (who illustrated Zero Hour: Crisis in Time), many seem to have been carefully hand picked because of their attachment to some of DC Comics bigger stories of the past too. Such as Morales, who drew the controversial Identity Crisis (2004) for DC Comics. It all adds up to a nostalgia soaked book in more than one way. A real treat for DC Comics fans, that’s for sure. But, equally, an enjoyable book for anyone really. Yes it helps if you are steeped in DC lore, but with such a dynamic and fast-paced, high-concept plot and even more dynamic and energetic art, this is an easily accessible read for all.

And, it just keeps on going from there. Building up speed and members from across time, with the likes of Waverider, a Levitz/Giffen pre-Crisis era Legion of Super-Heroes and a 1939 Batman, by the end of this issue not only do we get our cosmic-level antagonist, but we get a group of heroes that represent the best of the DCU, past, present and future. It may be a crisis for our collected heroes, but for readers it’s a joyride of magnificent proportions with some interesting concepts too. A DC Comics’ fans wet dream, in fact, with so many stand out moments it’s hard to keep count. But some you will be blown way by will be the double page spread of the Wolfman/Perez New Teen Titans by Paquette, the Legion of Super-Heroes’ witnessing the outpouring of creatures, monsters and dinosaurs by Fernando Pasarin and Oclair Albert and the revelation of Dominus by Doug Braithwaite. 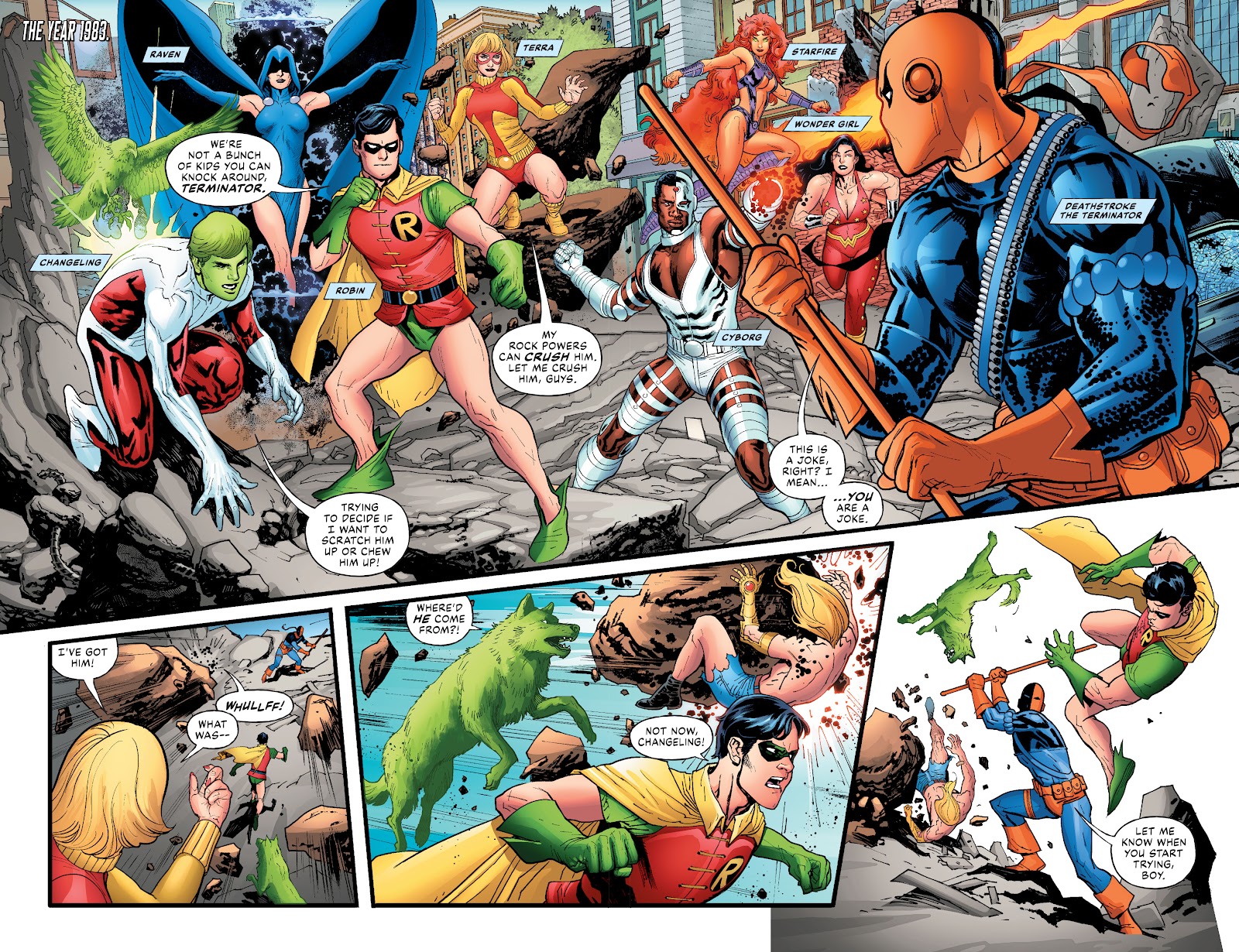 Oh, and just wait until you get to the final two pages. It’s a very surreal, that’s for sure and wonderfully captures by Mike Perkins in glorious black and white. Why black and white? Well, go pick up an issue and find out for yourself. But, it’s certainly one of the more bizarre and intriguing mysteries you’ll find in any new comic this week.

What with the smash success that is DC Future State and now this, it’s really been an outstanding week for DC Comics as it harkens back to its heritage in this book while looking to forge a new, alternative future. It’s enough to make you giddy with excitement and maybe that’s why I’m giving this 10/10. The third perfect score of the week from this humble reviewer.

Generations Shattered #1 is out now from DC Comics